Steam locomotive GNR(I) Q class No.131 officially launched and returned to service after a gap of 55 years. 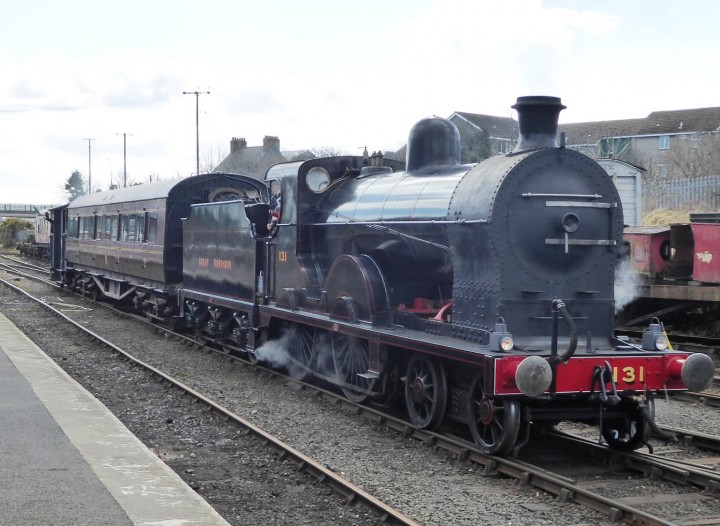 The RPSI’s newly restored Great Northern Railway (Ireland) Q Class No.131 was officially launched at a ceremony at Whitehead on Saturday 24th March. The locomotive, which was withdrawn in 1963, is now poised for a return to the main line.

The big day had got off to a great start with Charles Friel being interviewed live from Whitehead by Anne-Marie McAleese for Radio Ulster’s popular “Your Place and Mine” programme. He was able to tell Anne-Marie all about No.131, and got in a useful plug for the Edwardian Tea Room.

The sun was shining brightly as around 120 guests arrived to register. They proceeded to the Carriage Gallery, where light refreshments, including steam engine shaped shortbread, were being served by a team from the Edwardian Tea Room, augmented by several RPSI volunteers. This gave guests a chance to mingle and chat.

MC for the ceremony was RPSI Vice-President Dr Joan Smyth, who presented apologies from our President, Lord O’Neill, who had a longstanding prior engagement. She welcomed guests and introduced the various speakers.

Canon John McKegney, the RPSI Chairman, described the re-entry into service of No.131 as “a pinnacle of pride” for the Society, marking as it did the completion of the most extensive overhaul ever carried out at Whitehead.

He presented apologies on behalf of Lord Faulkner of Worcester, President of the HRA, who had been due to launch the engine but had had to stand down at the last minute for family reasons. However, the HRA was represented in the person of Director Steve Wood. In a message, Lord Faulkner sent good wishes to the RPSI, describing the restoration of No.131 as “a stunning achievement” and one which was being applauded by enthusiasts throughout Britain and Ireland.

Canon McKegney said the “resurrection” of No.131 marked the culmination of years of dedicated work and commitment by many people. He made reference to the late Pearse McKeown, a GNR(I) man from Dundalk who was instrumental in preventing No.131 being scrapped at Inchicore.

The RPSI Chairman also expressed appreciation to Irish Rail for transferring ownership of the engine to the Society in 2003, and conveyed special thanks to Gregg Ryan, the former Heritage Officer, who had helped to recover the remaining parts of the engine prior to that.

But key to the whole story had been Peter Scott of the RPSI and his team of volunteers, along with the professional staff of Heritage Engineering Ireland. All of them had shown incredible commitment and skill in restoring the locomotive over the past five years. Canon McKegney paid special tribute to RPSI member James Friel who had equipped the engine with the electronic safety equipment it needed to run on the main line.

The RPSI chairman said nothing would have happened without funding. He expressed gratitude to GROW – Generating Rural Opportunities Within South Antrim who had kick-started the £400,000 project with a grant of £130,000 in 2014. The RPSI membership had then shown its commitment with a magnificent response to the No.131 Appeal.

Canon McKegney said a highlight now would be the re-appearance for the first time since 1963 of No.131 on the Belfast-Dublin line. He expressed thanks to NIR and Irish Rail for their continuing co-operation with the Society.

The RPSI Chairman said he was delighted that the ceremony was taking place at Whitehead Railway Museum, which he said was now open a year and attracting increasing numbers of visitors. It was a fantastic amenity, he added, of which everyone should be proud.

Canon McKegney paid tribute to Siobhan Dillon, the RPSI’s acting part-time General Manager and announced that moves were under way to fill the post on a permanent basis. He said Mrs Dillon, who was unavoidably unable to be present, had worked tirelessly for the good of the Society and the Museum.

Emma Stubbs, Manager of GROW, congratulated the RPSI on its achievement in restoring No.131 to working order, and said that GROW and RPSI had enjoyed a long and fruitful association.

The restoration had been funded as a conservation and rural heritage programme and was part of an overall funding package. Not only was it good to see the locomotive restored, but it was important to retain the engineering and heritage skills involved in the project through the volunteers of the RPSI and the staff of Heritage Engineering Ireland. She said it was one of the few such projects that had created a lasting economic benefit for the area.

Mrs Stubbs said the RPSI and its volunteers should be proud of what had been achieved. She closed by congratulating the Society on the development of Whitehead Railway Museum and said she hoped it would become a premier visitor attraction in the locality.

Dr Smyth then invited Mrs Stubbs to officially launch No.131 by unveiling a plaque which will be displayed at Whitehead Railway Museum as a memento of the day and of GROW’s contribution. The GROW Manager unveiled the plaque by raising a green flag which she waved to much applause.

Alderman May Beattie from Mid & East Antrim Council said the restoration of No.131 was impressive and said the project was an excellent example of teamwork and commitment, involving the RPSI volunteers and the full-time staff of HEI.

She added: “Visitors will find no finer example of the preservation of industrial or railway heritage than here in Whitehead. I am sure this beautifully restored locomotive will enjoy great success when it returns to main line service.”

Conrad Natzio, author of the recently published “Irish Steam in the 1960s”, recalled travelling behind No.131 on the Great Northern main line in the early 1960s. He said he was very much looking forward to travelling once again behind No.131 – a day he had never dreamt he would see.

Steve Wood from HRA congratulated the RPSI on the restoration of No.131 and then re-presented the HRA Manisty Award to Canon McKegney. Mr Wood said the award to the RPSI for its development of Whitehead Railway Museum, was very well deserved.

Presentations were made of a bouquet of flowers to Emma Stubbs, a signed copy of “Irish Steam in the 1960s” to Peter Scott and framed line drawings of No.131 by RPSI member Richard Armstrong to Conrad Natzio and Steve Wood.

The ceremony over, guests proceeded to the platform where after a short wait, No.131 steamed down the siding, breaking through a ceremonial tape stretched across the line to a loud cheer and much applause.

No.131, with driver Adam Lohoff and fireman Andrew Davidson in charge, then operated a series of train rides up and down the site, to give guests a short sample of travel behind the locomotive.

Many guests took the opportunity to sample the fare at The Edwardian Tea Room, which was abuzz during lunchtime and the afternoon.

The £400,000 project received support from GROW, Generating Rural Opportunities Within South Antrim, through the Northern Ireland Rural Development Programme 2007–2013, which is part-funded by the Department of Agriculture, Environment and Rural Affairs and the European Union.

No.131 is a Great Northern Railway of Ireland “Q” Class 4-4-0 express passenger loco and was built in 1901 by Neilson Reid in Glasgow. It was mainly used on the lines from Belfast to Dublin, Londonderry and Cavan.

The locomotive was withdrawn from traffic in Dublin in 1963 and happily saved from the scrapman’s torch. After a period in store, it went on display on a plinth at Dundalk and was then dismantled as part of a restoration scheme that unfortunately did not come to completion.

In 2003 the engine arrived at Whitehead in a dismantled state, after having been presented to RPSI by Irish Rail. In 2014, a funding package was put together by GROW, and in 2015 the first test steaming of the boiler was carried out.

Many new parts had to be made from scratch to replace missing components and bit by bit the engine was painstakingly rebuilt. The project involved the professional staff of Heritage Engineering Ireland, the RPSI’s engineering subsidiary, as well as the Society’s own volunteers.

The overhaul involved the rebuilding of a coal and water tender to run behind No.131, while the engine also had to be equipped with modern electronic safety equipment to comply with current railway regulations.

Final approval procedures are in progress with Northern Ireland Railways and the Department for Infrastructure, and RPSI is confident that No.131 will be back on the main line by mid-May.

The No.131 web page has been updated with a video of the locomotive’s restoration.